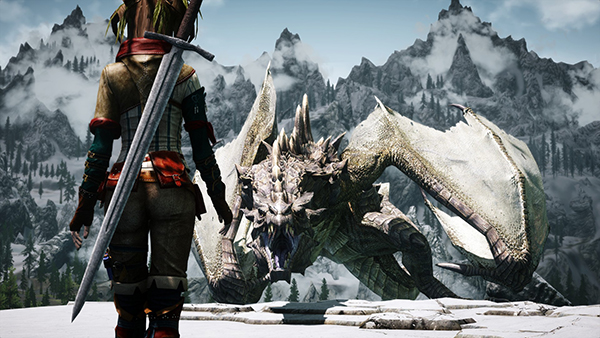 In our comparison of the best ESO leveling guides we came across several dedicated Dragonknight guides that are so truly awesome, they deserve some separate attention. The best of these, developed by the guys at Killer Guides, should be read by anyone wanting to lay claim to the most epic Dragonknight character in Tamriel. Below is short introduction into the Dragonknight persona and the foundation on which the specific class guide will build. For the full 50-page ESO Dragonknight guide masterpiece, click here.

For those interested in the next level in game guides, make sure to get

the ESO Zygor Guide. This in-game app can you be your personal navigation system and mentor in the world of Tamriel, showing you where to go and who to speak to. An amazing app that has saved us countless hours of searching.

The Dragonknight is the warrior class in the Elder Scrolls Online. Based on ancient martial art of Akaviri, Dragonknights can take on many play styles, both for group of solo play purposes. The most likely combination you will find, is the heavy armoured full tank with one-hander and shield or a focused melee DPS boasting two strong one-handers or a might two-handed sword, axe or hammer. However, due to the varied mix and match setup of ESO, you’ll also be able to choose more uncommon roles for your Dragonknight, such as a offensive healer or ranged damage dealer.

As explained in much more detail in the best ESO Dragonknight guide by Killer Guides, every character has three distinct different skill trees. The Dragonknight is not exception to this rule. Each tree favours a certain play style and each ESO guide will confirm, it is often best to become a master of one of the trees than a jack of all traits but a master of one.

The first skill tree is called the Ardent Flame and focusses on fire-based attacks and debuff spells. This can be considered as the most offensive of the three trees and is suited for the player interested in dealing tons of damage, owning at PvP, playing in groups and performing crowd control. Of course, the focus of this tree is the good ol’ DPS.

Players interested in approaching both PvE and PvP/AvA from a durability standpoint, the Draconic Power skill tree can offer a great option. Its still focus on defence in the form of damage resistance and self-healing spells, both over time, instantly and through absorbing the health of your foes. This skill tree will be popular with solo-players craving the self-healing capabilities and group players looking to take on a tank role with the ability to get themselves out of tight spot when needed. Although survivability increases in relation to the Ardent Flame tree, the DPS amount suffers.

The last of the skill trees for the Dragonknight is a support based tree called the Earthen Heart. It consist of specialised crowd control spells and group buffs making this tree excellent for players focussed on support groups, crowd control and PvP. Although the survival (/healing) capabilities are down in comparison to the Draconic Power tree, the Earthen Heart makes up for it crowd control, making this tree also a potential option for players with a passion tanking.

Although there is no set play style in Elder Scrolls Online, you won’t be surprised to find that most Dragonknights will be boasting an impressive heavy armour set with either a one-handed weapon and shield or a two-handed weapon of choice. Of course, feel free to experiment with all types of armours and weapons and see if there is a specific niche playing style that fits your end game and will make you own by catching your enemies of guard with an unexpected play style. It goes without saying, that the specific ESO Dragonknight guide have done all the hard exploring for you and can give you a shortcut to mastering your class.

Of course entirely depended on the Pact you choose to pledge your allegiance to, it will be either the Orcs, Nords or Redguards that will suite this class best. High Elves will most likely be the most uncommon of choices for the Dragonknight play style as their race skills are magic focus, although one can imagine creative players will be able to find a great combination here too. If this is a route you’re interested in taking, perhaps have a look at the Bretons and Dark Elves as well. If more interested in good ol’ fashioned DPS, the Khajiit and Redguards are your two favourite picks.

Although there are a few preferred options if you’re interested in tweaking your character to perfection, don’t worry if you want to play a different race or have already made a sub-optimal choice. The Elder Scrolls Online is an extremely varied game and through character build and skill you can still easily own without having the perfect race-class combination.

For more on becoming a master in with this class, get a copy of the best ESO Dragonknight guide here.